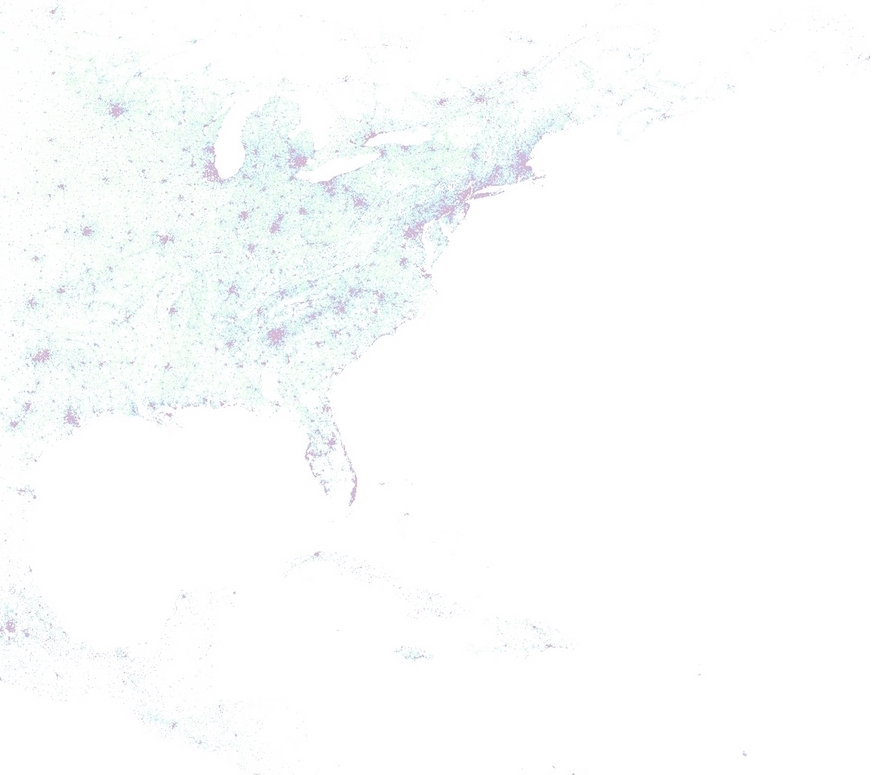 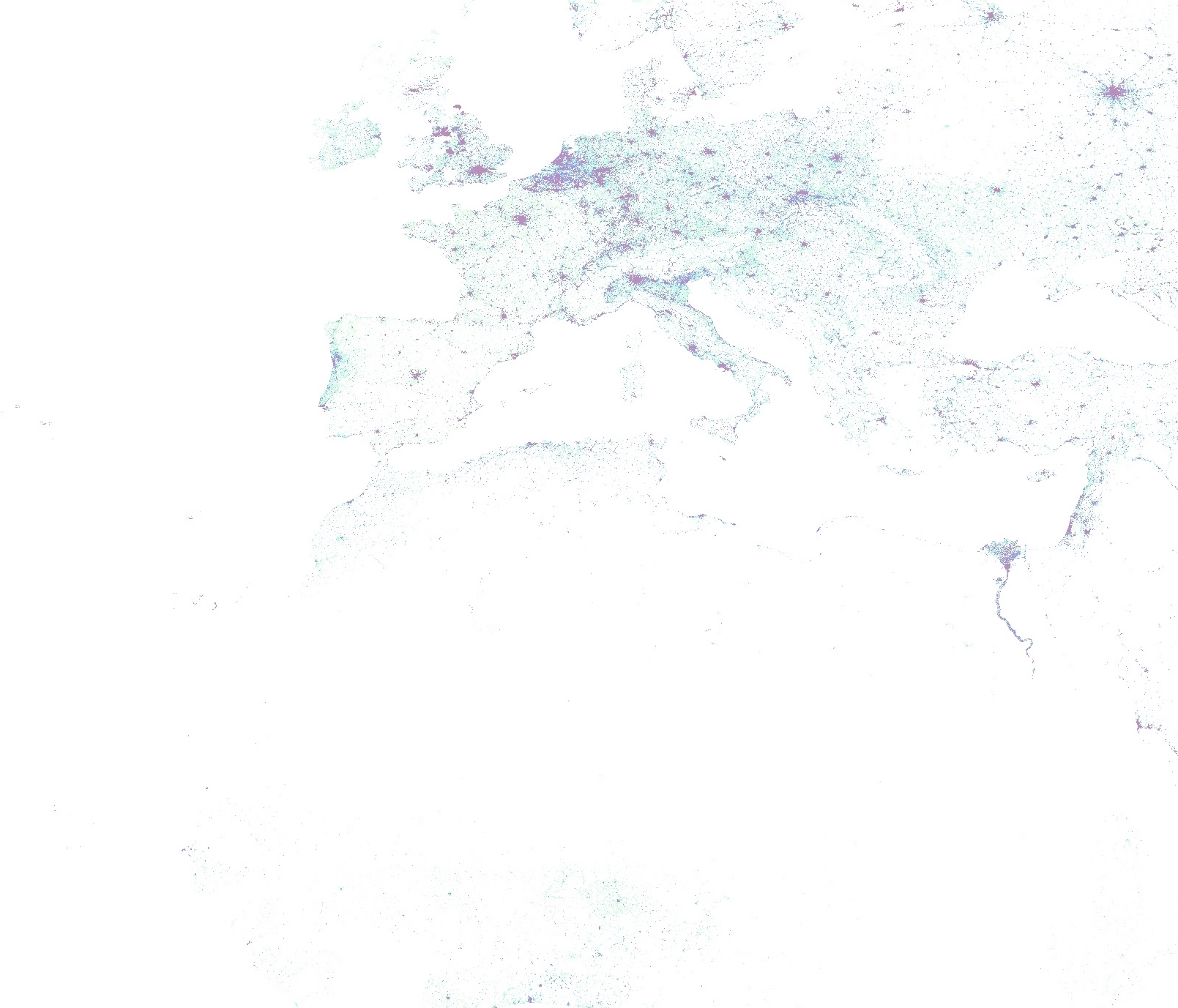 This model provides a globally consistent, spatially resolved (250m), estimate of carbon footprints (also called Scope 3 emissions) in per capita and absolute terms across 189 countries. It incorporates existing subnational models for the US, China, Japan, EU, and UK. The model is described in the open-access publication Carbon footprints of 13,000 cities.

This article from Scientific American also gives a nice overview of the study. The results have also been covered by Forbes, World Economic Forum, NASA's Earth Observatory blog, US News & World Report, National Geographic, among others. The dataset is also available on the WRI ResourceWatch platform (blog).

One observation that can be made based on this model is in many countries, a small number of large and or affluent cities drive a significant share of national total emissions. This means concerted action by a small number of local mayors and governments has the potential to significantly reduce national total carbon footprints. Some other observations based on the results include:

The model estimates the carbon footprint (CF) of individual cities. When interpreting the results please keep in mind that the results from a global top-down model will never be as precise as more detailed local or bottom-up assessments. Additionally, defining the city population and bounds is hard. We use the GHS-SMOD definition of "cities" as contiguous population clusters. This does not correspond directly to the precise legal jurisdiction for many cities. Additionally, the population within these clusters may include exurbs and other areas and may not correspond to the city's official population. Taking the city's estimated population as given, model provides results for each city with an associated uncertainty range. The 1 standard deviation value is shown. The mean per-capita CFs are also shown as a median estimate with an associated uncertainty range.

Important note about the city names: The GGMCF is fundamentally based on the EU's GHS-SMOD gridded population model. The urban clusters are identified on top of that gridded population model, and then we attempted to label the cities corresponding to each cluster. To get the city names we use the NORPIL list of cities and ESRI's World Cities database. This matching is not perfectly accurate. In some cases the name is picked up from a closely adjacent city, or from an annex suburb that is contiguous with a larger city. Many clusters we have not yet been able to name; these appear as simply "Unnamed city" in the list.

Below are tables with the top 500 cities, by absolute CF and by CF per capita. See below for download links.

The global results can be viewed using this interactive map. The lefthand map shows the gridded global carbon footprint, as absolute volume of emissions per grid cell. The top 100 cities are shown (global top 100 in blue, top 50 in orange, and top 10 in red). Open map in new window »

Note: the Web Mercator projection used for this online presentation distorts high-latitude regions (e.g. northern US and European cities), making them appear larger and visually more prominent than they are. All numerical analyses should be done using an equal-area projection. This map was generated with the NTNU Spatial Footprinting Toolbox.

The top 500 cities in absolute and per capita terms can be donwloaded here as tab-delimited text files:

The complete model can be downloaded as a GeoTIFF file:

These results are licensed under a Creative Commons Attribution-NonCommercial 4.0 International License.

Please contact us if you would like to use these results for commercial work or if you have an idea for collaboration based on this model.

To cite this work please refer to this paper:

The model was constructed using

The above were combined to distribute the carbon footprint of each nation into a spatially detailed gridded model.

Key points of uncertainty are the relative carbon intensity of equivalent expenditure in urban vs. rural areas, the allocation of direct emissions from households, and the typical allocation and aggregation uncertainties associated with the carbon footprints. In the paper we provide results with reliability estimates based on Monte Carlo sensitivity analysis, perturbing the subnational spatial allocation while preserving the national totals.

Defining “cities” is not trivial. In some countries there are up to seven levels of administrative divisions. In the paper we followed the Global Human Settlement Layer, GHS-SMOD. This identifies towns and small urban areas ("low density clusters") as clusters with >5,000 persons and cities ("high density clusters") as contiguously populated areas with >50,000 inhabitants.

The results provide a general view of hotspots and patterns, but to compare the CFs of individual cities or to track how a city’s footprint evolves over time, more detailed accounts based on local data and standardized measures are needed. All individual city footprints presented here should be interpreted with the 1 standard deviation value, which in most cases is substantial (10-100% of the CF itself).

The cities with the largest total footprints (named here are the top 20) have a large CF due to a combination of population and high CF/capita (bubble size). Cairo and Jakarta have relatively low CFs per capita but large populations, while Miami and Al-Ahmadi in Kuwait have smaller populations with higher average footprints, and thus similar total CFs. Vertical lines show 1 standard deviation for each city CF estimate. [PNG SVG

Cities contain 60% of global population and drive 64% of global carbon footprint (CF), but within this the CF is highly concentrated in a small number of high CF cities and high CF/capita suburbs, while populous low CF cities and rural low CF areas contribute relatively little to the total global CF. The lower area shows UN projected growth rates 2020-2050 for each grid cell. The highest growth is expected in low CF cities and declining growth in rural areas, with ① modestly high growth rates around 1-2%/yr for top-CF cities, ② bands visible for cities in India (1.9%) and China (0.6%) across all city sizes, ③ fastest-growing cities currently contributing little to global CF, and ④ declining rural populations all CF/capita, with rural depopulation in Japan (-2.8% capita/yr) visible, but some growth in lower CF/capita regions. PNG SVG

Construction method for gridded model of carbon footprints. The national total footprint (or state/subnational unit footprint for the countries for which subnational data exist) is split in to urban and non-urban components based on relative spending patterns, then spatialized using purchasing power and population. This approach is comprehensive and consistent globally but cannot substitute or individual city footprint accounts based on local data. PNG

Slideshow about the paper